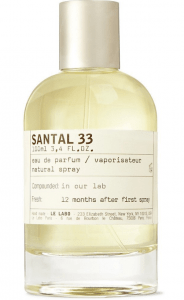 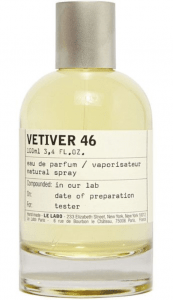 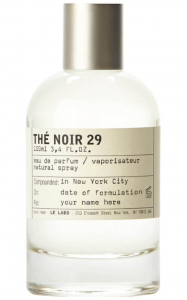 How We Found the Best Le Labo Colognes

Le Labo is a luxury fragrance house based in New York City, most famous for its minimalistic bottles and packaging.

Despite its low key appearance, the brand has many fans worldwide, and we certainly consider ourselves amongst them.

Le Labo house only 18 fragrances in their collection, each one made with care and attention, and bottled in front of the customer in-store.

Read on for our reviews of the top Le Labo fragrances, ranked. 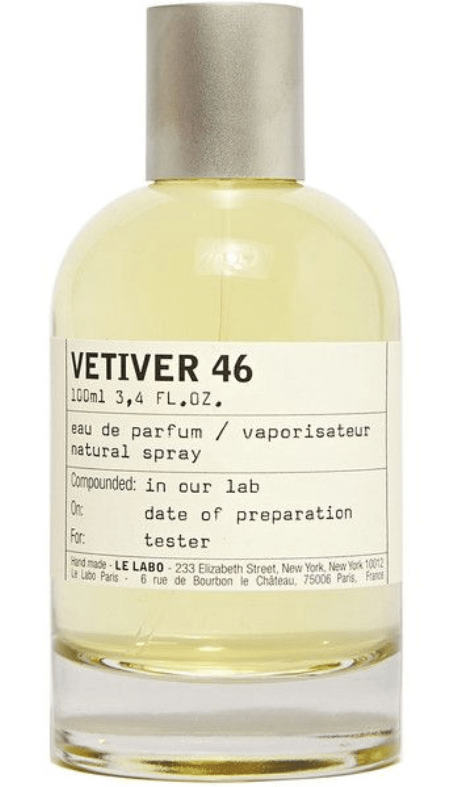 Heavy and smokey, Vetiver 46 consists of labdanum, vetiver, pepper, cedar, amber, bergamot, vanilla and cloves.  Picture thick clouds in incense and you get an idea of what this fragrance smells like.

Definitely one of Le Labo’s more unique aromas, this does have an air of masculinity around it despite being a unisex fragrance.

This is one of the longest-lasting Le Labo fragrances we have tested, so you can be assured you will be getting your moneys worth in terms of performance.

You can definitely smell the quality of the ingredients through Vetiver 46, as it smells classy and high-end, perfect for the more formal of occasions.

We love Vetiver 46 as a choice for the fall or winter. 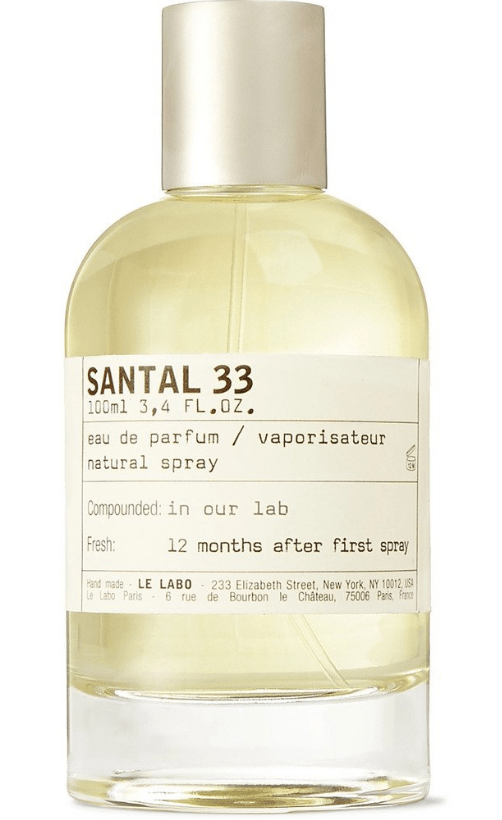 Now if you’re looking for a unique, stand-out fragrance, the popularity of Santal 33 suggests you may need to look out there.  If you’ve ever wandered around New York City and noticed a particular perfume or cologne lingering in the air, chances are this was it.

This scent makes for wonderful, everyday use, perfect for chilling out at home or even for casual office environments.  You will get definitely get compliments from this, but be prepared for the inevitable “what are you wearing” questions!

A worthy addition to our list and a beautiful cologne to add to any man’s collection. 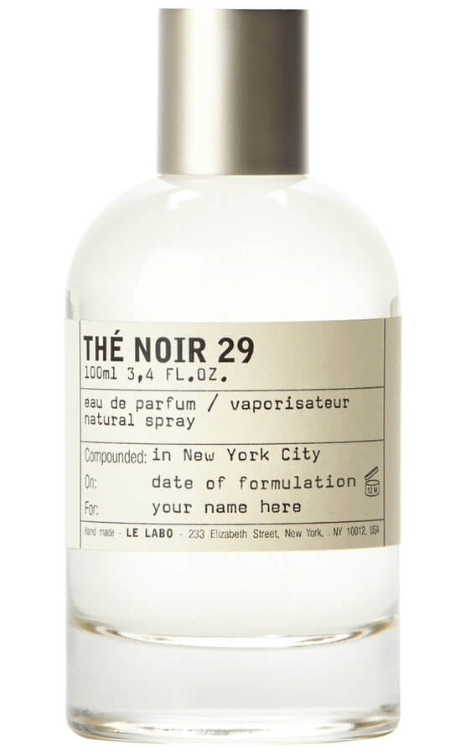 The dark and spicy notes exude masculinity despite being a unisex fragrance.  Those woody fragrances definitely hit you with a punch, but the slightly fruity and floral notes come through to create an irresistible scent.

We find The Noir 29 beautifully intoxicating, and if you like Wood Sage and Sea Salt by Jo Malone, you’re guaranteed to like this one.  Potent and luxurious, this is a firm favourite amongst fragrance fans and one of Le Labo’s best sellers.

Be warned, some claim The Noir 29 has an aphrodisiac effect, your partner may not be able to keep their hands off you when wearing this. 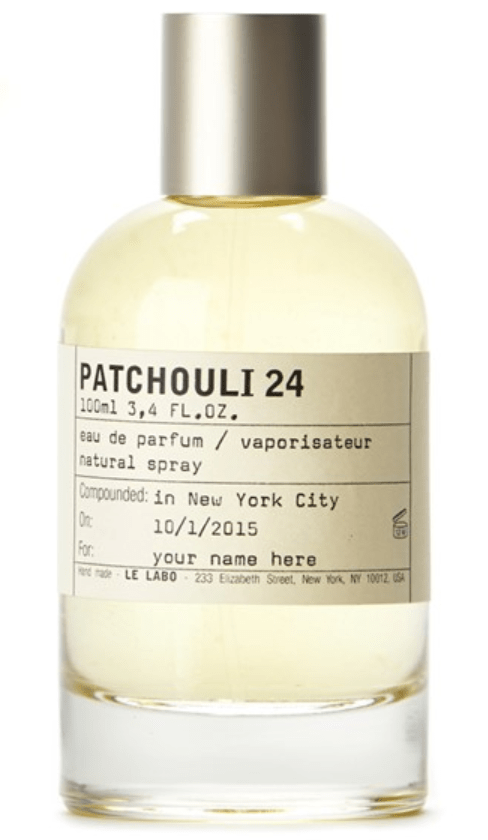 Patchouli is a unisex fragrance, first released in 2006. Patchouli 24 is classed as a woody fragrance, due to the use of the styrax (an oil extracted from a tree).

Accompanying the patchouli are notes of birch, styrax and vanilla, and, despite the name, the patchouli takes a back seat to some of the other more dominant fragrances.

Many reviews claim this smells ‘smokey’ and almost ‘burnt’, caused by the incredible earthiness of the fragrance.  We think this adds a dark and sexy twist to the scent.

Patchouli 24 is a unique cologne and often features at the number 1 spot in their Le Labo fragrance choices.

We see this more as a night time fragrance during the full, owing to its smokey lustre. 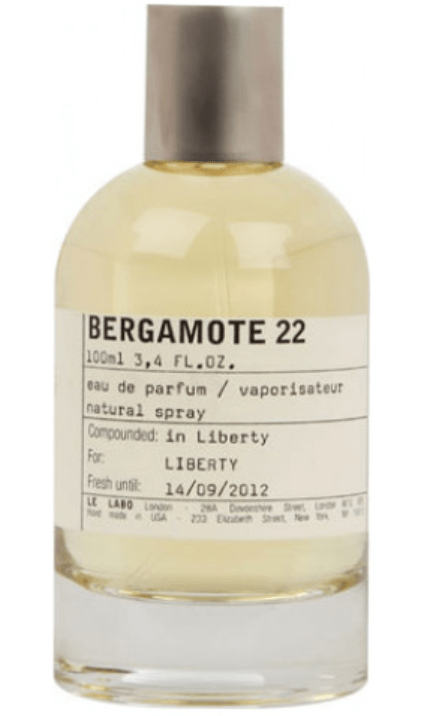 The fragrance opens with a fresh burst of bergamot (almost lemony), which makes it a very refreshing and pleasurable scent.

The zesty opening is followed by the spices, vanilla and musk giving it a woody angle.

This is definitely one for the warmer months, better suited for daytime use.

Longevity on this fragrance is fairly moderate, lasting around 5 hours, and projection is also relatively low.

We love Bergamote 22 because of its mass appeal.  This is entirely appropriate for office wear and will definitely attract compliments.

We love it so much that this is definitely a contender for the best smelling Le Labo fragrance in the collection. 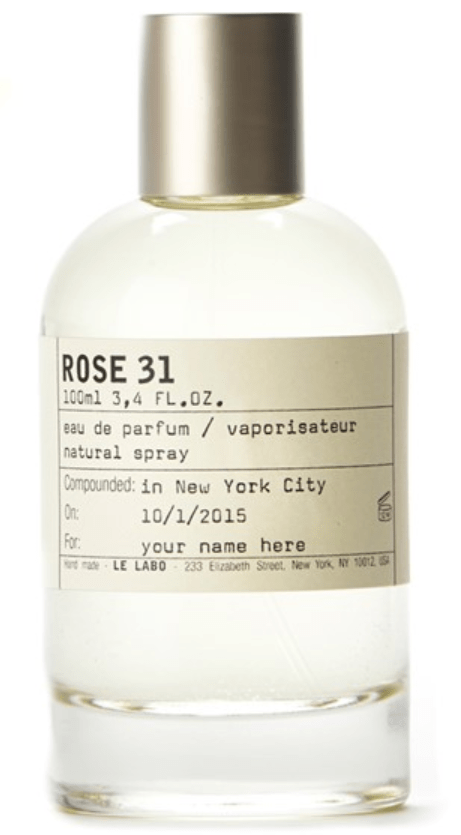 First released in 2006, Rose 31 is a wonderful fragrance with notes of cumin, vetiver, cedar, musk and oud, as well as the obvious rose.  This makes for a very pleasant floral woody musk.

The rose is dominant from the first spray, but cumin soon follows, which offers a dirty yet sexy scent.  The use of cumin gives Rose 31 an animalistic vibe, and one we can’t get enough of.

After settling on the skin, the cumin starts to mellow and develop into a wonderful powdery scent, akin to luxurious hand lotions.

Given the overarching presence of the rose, we would say this leans more towards a feminine fragrance but don’t let that stop you.  A confident man could easily pull this off and look sexy while doing so.

The benefit of Rose 31 is that its truly an all-season fragrance, suitable for day or night.  This could quickly become a staple in your collection and perhaps your new signature fragrance. 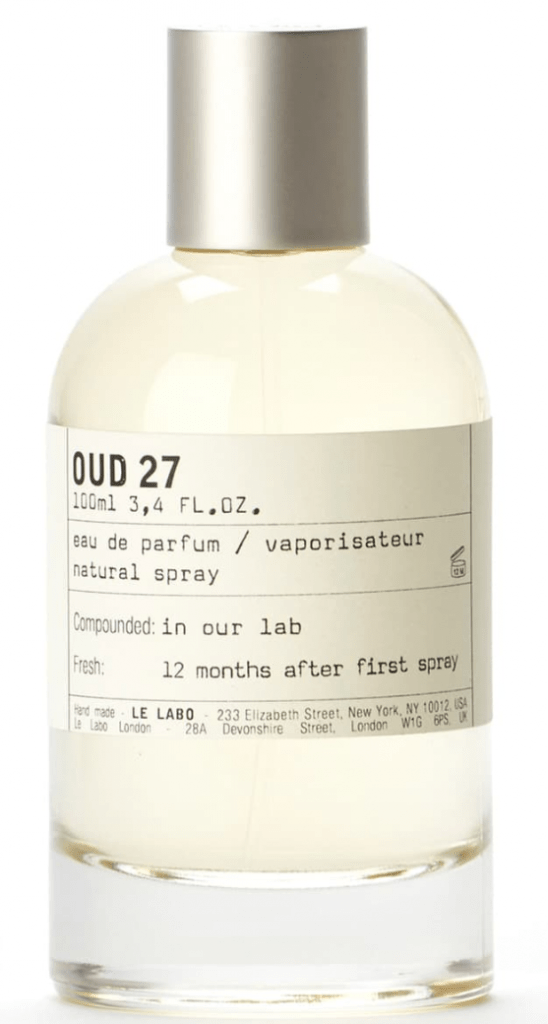 An oriental woody fragrance, Oud 27, is a powerful oud based scent.

Alongside the Oud, patchouli, cedar, ambergris, Bulgarian rose and amber feature to create an aroma which many describe as having animalistic qualities.

This aroma can be quite divisive, you either love it or hate it, so probably not an appropriate office fragrance.

But once dry, the fragrance develops into something much more likeable and definitely interesting.

What’s for sure is that Oud 27 is for the confident man, not worried about fitting in and generating polarizing opinions.

If you’re looking for a unique scent, then Oud 27 could very well be for you.  We tend to think it’s better suited to the colder months and for evening use. 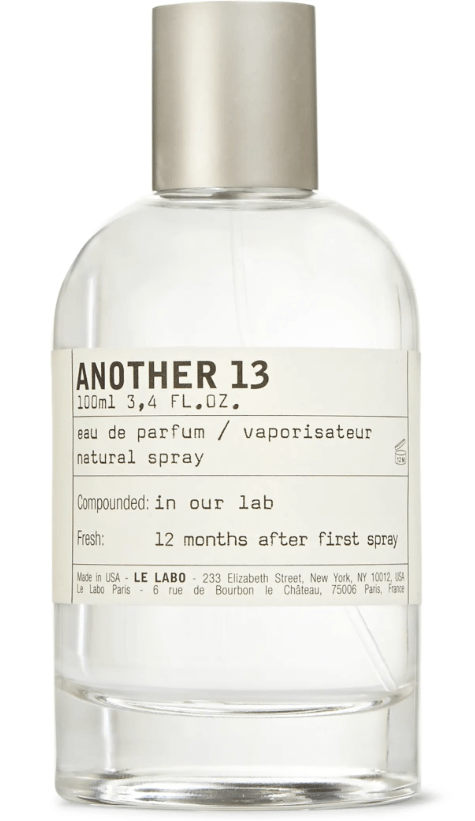 Another animalistic fragrance, Another 13 is the result of a collaborative effort between AnOther Magazine and Le Labo.  Another 13 is comprised of Ambroxan and 12 other ingredients which include moss, jasmine and ambrette seeds.

Another 13 is a bright and woody scent, and we think its an absolute powerhouse.  Originally intended to be a limited edition, the success of Another 13 saw it becoming a staple part of Le Labo’s permanent collection – and we are glad it did!  Out of all the fragrances we tested, this received the most positive compliments.

Now stick with this after the first spray, which, for some, is incredibly alcoholic.  Once it settles down, the alcohol gives way to wonderful warm and musky scent, potent with sandalwood.

Longevity on Another 13 is crazy, just a few sprays will last you all day.

Wear this on a date night to create the ultimate great impression. 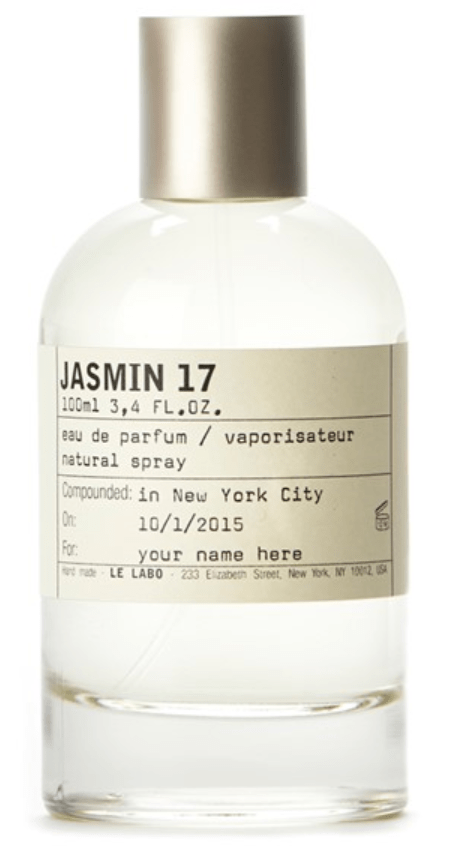 Jasmin 17 is a beautiful, luscious and attractive fragrance with powdery qualities.

Many praise Jasmin 17 for being true to its main ingredient, Jasmine, creating a fresh, clean and natural fragrance.  Others compliment the addition of orange blossom to create a more zesty aroma.

Opinion is divided as to which one features more prominently, but we can definitely detect both notes here.

A very inoffensive and easy to wear fragrance which leans towards summer wear, we can see this working beautiful on long summer walks through the forest. 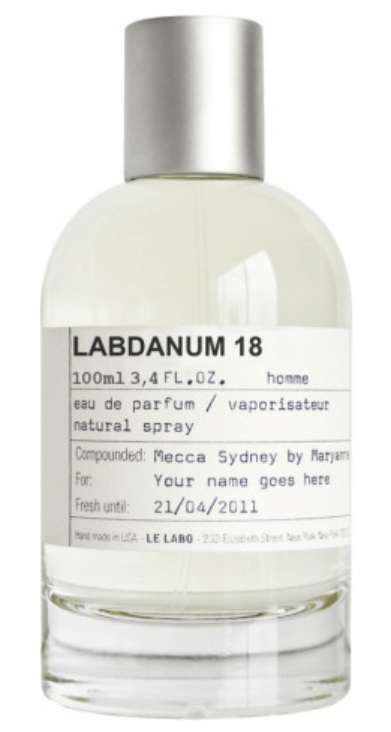 The best way to describe Labdanum 18 would be as a ‘comforting’ fragrance, refined from start to finish.  It’s definitely one of the most subtle offerings on Le Labo’s menu, with most writing it off as a ‘baby powder’ scent.  But given time, it has so much more to offer.

This fragrance has creamy, lemony pleasantness that we just can’t get enough of.  It almost has a nostalgic element, recalling emotions long since forgotten.

We recommend using this during the warmer months, worn around your loved one this is guaranteed to have them cosying up to you. 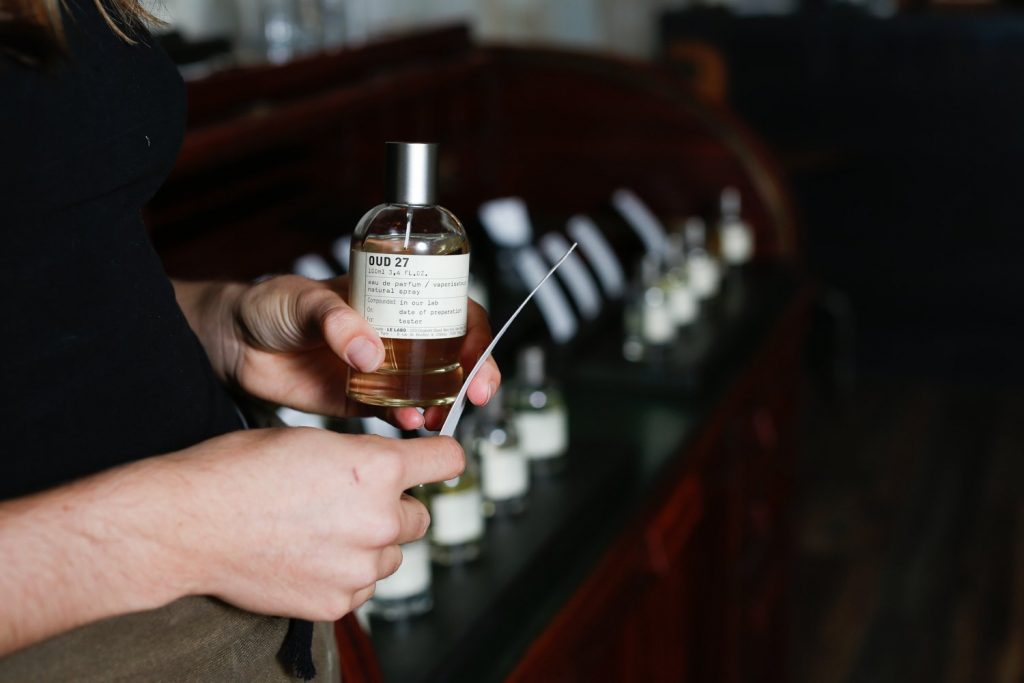 History of the Brand

Le Labo is fairly new to the fragrance scene.  First founded in 2006 in New York City, Le Labo was founded by Eddie Roschi and Fabrice Penot.

Le Labo is most widely known for its practice of bottling a fragrance at the time of purchase, customizing the bottle with the customer’s name.  Outside of its usual collection, the company also offers exclusive fragrances which are only available at specific locations worldwide, including Tokyo and Paris.

Most notably, Le Labo avoids the use of animal products, parabens, preservatives and colors in their fragrances which has earned them many fans worldwide.

Is Le labo a luxury brand?

Since Le Labo’s introduction in 2006, it has quickly gained a cult-like following.  Given Le Labo’s limited product line and unique customization options, it has an air of exclusivity other brands fail to offer.

The company focuses on using wholely vegan ingredients, enabling them to ride the wave of the popularity of the vegan movement.

As a reflection of Le Labo’s increasing popularity, the brands’ candles featured in Beyonce’s recent video for “Sandcastles.”

Despite being acquired by Estee Lauder, Le Labo are determined to stick to the strategy which made them so popular.

“Our role is to strike the right balance between what we believe the brand should stand for and what [Lauder] are pushing for”, says co-owner Eddie Roschi.